Skip to main content
Read more about our Library services, spaces, and resources 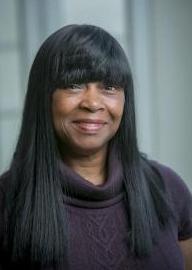 Beverly Murphy, MLS, AHIP, FMLA, began her term as President-Elect of the Medical Library Association (MLA) in May at the end of the annual conference in Seattle, WA.  Elected in December 2016 by the MLA members, she will serve as President from 2018 to 2019. Her election to this office is also a milestone for the Association since she will be the first African-American President of MLA. Beverly has been at Duke for 34 years and is currently the Assistant Director, Communications and Web Content Management in the Library and the Hospital Nursing Liaison for the Duke Health System and Watts School of Nursing. She also serves as the outreach contact for Neurobiology and Ophthalmology.

Beverly has provided leadership to the profession for many years, from the state and regional levels to the MLA national Board of Directors.  She is a member of MLA's Academy of Health Information Professionals (AHIP) at the Distinguished level and became a Fellow of MLA (FMLA) in 2015.  Her commitment to the library profession has been demonstrated through the time and expertise she has dedicated to making library associations stronger and relevant to their members.

Her contributions to MLA began in the mid-1990s when she became a mentor for the Academy of Health Information Professionals and then a liaison to the MLANet Task Force.  She quickly went on to serve on the Publications Committee, Credentialing Committee, National Program Committee, and the African-American Medical Librarians Alliance Special Interest Group (AAMLA SIG).  She brought her expertise to MLA News as Editor for 6 years and holds an appointment on the Journal of the Medical Library Assocation  (JMLA) Editorial Board.  After serving on the Education Committee, the Diversity Symposium Planning Group, and the Nominating Committee, she became Chair of the Professional Recruitment and Retention Committee, which reflected her commitment over the years to bringing more people into the profession and increasing the number of under-represented minorities within MLA.   All this work culminated in her election to the MLA Board of Directors, where she worked on major issues facing the Board and MLA members from 2008 to 2011.

Beverly has also supported MLA on the chapter level as well, serving as Chair of the Mid-Atlantic Chapter (MAC), along with extensive work on numerous committees, several of which she chaired. Her many years of leadership and service at the regional chapter level were recognized by her colleagues when she received the Marguerite Abel Service Recognition Award in 1998 and the MAC Librarian of the Year Award in 2007.  Her contributions within the region were also recognized by the National Library of Medicine (NLM)  and the National Network of Libraries of Medicine (NN/LM) when she was appointed to the NLM Biomedical Library and Informatics Review Committee and the NN/LM SE/A Regional Technology Committee. Her work on diversity and recruitment issues was further acknowledged at the state level when the NC Library Association presented her with the Roadbuilder’s Award for Special Librarianship through its Round Table for Ethnic Minority Concerns.

In addition to her formal leadership roles and association work at the chapter and national levels, Beverly has had a strong commitment to sharing her expertise and pride in the profession with peers.  She has authored numerous presentations, posters and papers and has been a willing and active mentor to many, from high school and graduate students to new librarians in the health sciences field.  She has had a particular interest in encouraging African-American librarians to become more engaged in the association and the profession.

Beverly's strong commitment to the profession and her colleagues as a leader, expert, and mentor, has led to this latest recognition at the national level.  The staff of the Medical Center Library & Archives congratulate her on her election to this new national role.